Your cart is empty

Your  Circadian Clock is called the Master Clock for a very good reason. That’s because it functions just like THE Master Clock, the granddaddy of all clocks located at U.S. Naval Observatory.  Fortunately, your Circadian clock isn’t kept in a tightly sealed high security vault.  You have complete access to it and you don’t even have to keep track of a password.  Which means you have access to all the clocks that control your circadian rhythms.  (If you’re feeling intoxicated with power right now,  it’s completely understandable).

The term circadian is derived from two Latin words, circa (approximate) and dies (day), denoting approximately “one day”.  Hence Circadian denotes a natural cycle of physical, mental, and behavior changes that happen around a 24-hour period.  All our body systems have their own individual clocks and are connected to the Circadian “Master Clock”.  For your body to function properly, these clocks must be timed to work like, well…clockwork.  When these circadian clock rhythms become misaligned, you’ll feel the immediate effects that can lead to serious chronic health problems. 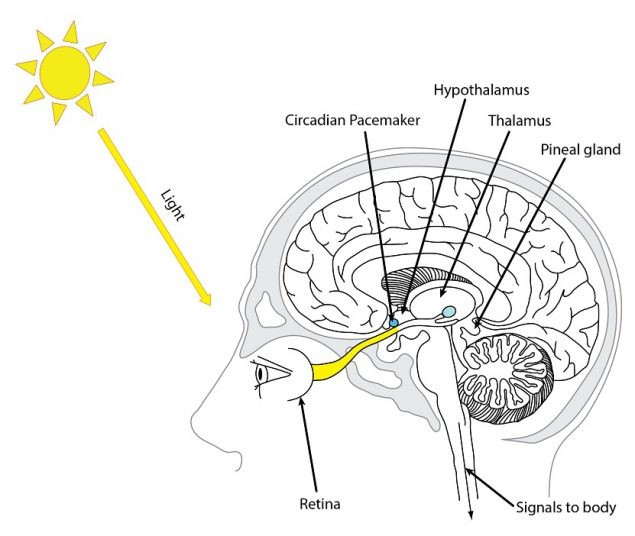 Light enters the eyes, (even through closed eyelids during sleep) stimulating a signal in back of the retina down a nerve tract to the circadian clock in the brain.

The single most important word to remember is LIGHT.  Your circadian clock takes its cue from LIGHT.  Say it three times.  LIGHT.  LIGHT. LIGHT.   The color of that light makes a big difference too.  We won’t go meta on you because it has to do with wavelength (a lot of info on that subject!)  but if you’re curious, here’s where to learn more about wavelength and color.

If you have a healthy skepticism of all this stuff about master clocks, circadian rhythms, light color, and serious health problems, etc., we applaud you. We shouldn’t believe everything we read or hear without researching valid information to make an informed decision (and if you don’t, you should).  But alas, that takes a lot of time that you probably don’t have.  The good news is this blogpost contains links to credible research studies published in respected publications. So you can read that information with your own eyes (but hopefully not by the glow of blue light from your computer at night!).

Let’s walk through the causes and effects of a misaligned circadian rhythm.

One cause of an out-of-whack circadian rhythm is the lack of secretion of a hormone created in the brain called melatonin. Melatonin is the sandman of sleep that sends us off to dreamland. This hormone’s release is triggered by the transition from light to dark, and when inhibited or not secreted at all, it becomes very difficult if not impossible for you to fall asleep. When your brain releases melatonin on a consistent natural 24 hour daytime/nighttime driven schedule, a natural circadian rhythm is maintained.  But when there’s an inconstant release of melatonin it creates a circadian rhythm that doesn’t follow the natural light/dark cycle.  That includes not getting enough natural light during the day. When that happens you sleep badly.  Sometimes very badly.  Also known as sleep disturbance, the result is sleep deprivation.

Maybe for you,  the above has “a need to know “ factor of absolutely zero.  But here’s “a need to know” factor of x100.   A number of research studies show that blue light at night interferes with melatonin secretion and computers, tablets, readers, televisions, and cellphones are the main sources of blue light that prevent  the release of melatonin.  One study showed that only 2 hours of digital device use at a night suppressed melatonin secretion by  23% after 1 hour by with a significant increase to 38% after 2 hours.  Translation: If you use one of these devices two hours before bedtime it will seriously reduce your brain ability to produce melatonin by nearly 40%.   That’s pretty darn close to half and makes you a strong candidate for sleep deprivation.

There are consequences of sleep deprivation and none of them are good.  Do you make more mistakes at work than usual?  Trouble concentrating? Get colds more often than normal?  Are you easily irritated all the time by your spouse, kids, and even the dog for every little thing?  Get sleepy when driving, narrowly avoid a car accident, or even worse have a car accident?

Supplementing with melatonin is tricky because it’s impossible to mimic the natural melatonin blood level and time curve.

Wait a second, not use a digital device 2 whole hours before bedtime?  I-M-P-O-S-S-B-L-E.  As outrageous as it seems, it is possible.  In another blogpost we will share some tricks, tips, and show you why thinking you’ll get ahead on all those work and email responses at night actually makes you less productive.

Light, and the color of the light, has a powerful effect on circadian rhythms.  Artificial light at night (otherwise known as ALAN) also throws your circadian rhythm off-track because it emits blue light.  Why does that matter?  First of all, artificial light (also referred to as modern light) contains blue light and so it plays a rotten trick on our brains.  ALAN tricks our brains into thinking it’s still daytime and eliminates the cue that tells them it’s time to sleep.  And, because blue light puts the kibosh on our brains’ ability to release melatonin on a consistent schedule, our circadian rhythm then gets thrown for a loop.

So why is all this information so important?  Many studies have investigated health effects of ALAN  and report a direct connection between artificial light at night and melatonin suppression, phase shift, sleep latency and body temperature.  In addition, insomnia, sleep disorders and disturbances of deep sleep are induced by ALAN exposure which can cause chronic health problems.  Also the negative effects from ALAN increase with the brightness of the light and the length of the exposure period. 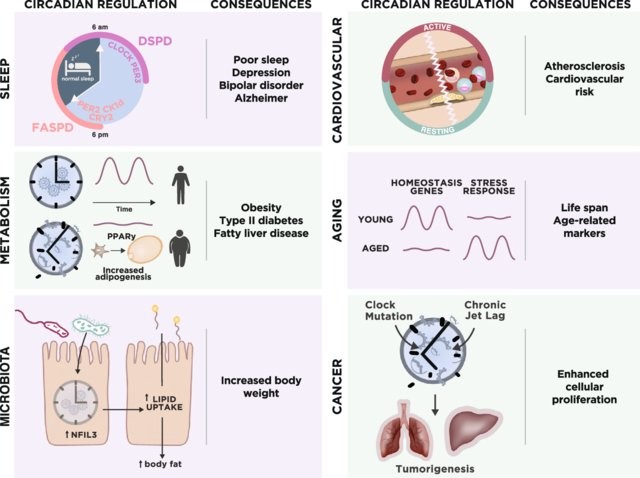 The consequences of circadian rhythm disruption occur within a number of physiological areas.

One study in particular revealed that sleep disturbance due to blue light exposure also has an impact on aging and metabolic processes as well as on heart disease, diabetes, and obesity.  Emerging evidence from the past few years suggests that exposure to blue light at night also negatively influences mood.

So, as you can see when it comes to the consequences of artificial light at night, there’s more than meets the eye.

Over billions of years, the sun was central to the evolution and adaptation of life on earth. And then a guy named Edison came along and figured out how to make a light bulb.  His invention was one of the biggest game changers in human life.  People were no longer limited to a daily light/dark cycle.  Thanks to Edison and his amazing light bulb, people could perform daytime activities well past dark time.  So, on one hand, “Hooray for the Light Bulb!”.   On the other hand, “Boooooo”.

Why the thumbs down?

Well, the glorious light bulb that allows us to  stay up as late as we want at night creates an inconsistent sleep/wake cycle.  That’s what wreaks havoc on our billion-year-old circadian rhythm.  Fast forward 100 years and researchers are now making important discoveries about the importance of circadian rhythms.  One of those discoveries is that  mental illnesses are associated with circadian rhythm disruptions.

LED lighting is far worse than the good ol’ fashioned light bulb because it emits much more blue light.  The findings from LED lighting studies are of particular concern to psychiatry.   Many mental illnesses are associated with circadian rhythm disruptions, including bipolar disorder, depression, seasonal affective disorder, schizophrenia, alcoholism, and ADHD.

Melatonin is the chemical code of darkness, and study data crucial to the neuroendocrine system consistently showed that melatonin improves cognitive performance and age advancement.  In Alzheimer's disease (AD) and Parkinson's disease (PD) neurodegeneration  melatonin was shown to have preventative effects.

At the beginning of this blogpost you learned that the circadian clock, ( the“Master Clock”) is connected to all the individual circadian clocks that run our body systems and their respective organs.  These systems have their own circadian rhythms also known as peripheral circadian clock rhythms.

Right now, you’re probably asking “And your point is….?”

Well, chronic diseases develop when this network of rhythms no longer are playing their notes from the same music sheet.  That’s the same kind of disharmonious misalignment that affects all the  moving parts of your circadian rhythm which in turn can cause disease within a variety of organs. 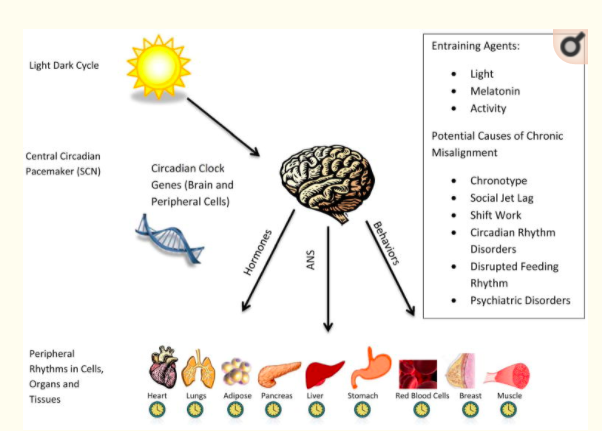 Researchers have linked and circadian rhythm misalignment to cardiovascular diseases (CVD), diabetes and obesity on multiple levels.  The disruption of circadian rhythms can also contribute to the beginning of depression, and that can lead to additional medical issues and health disorders.

It’s hard to believe blue light can increase the risk of cancer,  but research studies show that it’s true.  Exposure to artificial light at night (ALAN) results in a disruption of the circadian system, which is deleterious to health.  In fact, a number of  epidemiological studies have also linked light at night (melatonin suppression) with a higher incidence of different types of cancer.

The image below illustrates how the main input is the light-dark cycle via the eyes and is the most important synchronizer to maintain a natural circadian rhythm.  The outputs of the circadian system light/dark cycle is, among other things, the sleep/wake cycle, melatonin hormone  secretion, and body temperature. These outputs occur like clockwork. The effects of the circadian rhythm also operate on a molecular level and are represented in the greenish circle. 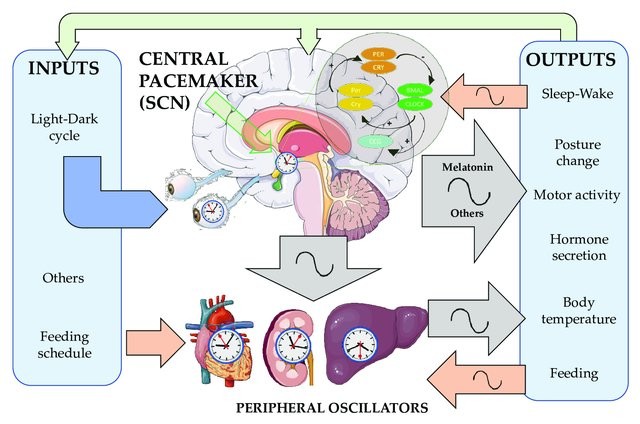 The circadian clock and the cell cycle are closely linked.   A number of research studies have revealed how a disrupted circadian rhythm affect cells at a molecular level which then affects the cell cycle. Cancer is caused by abnormal cell growth which is characterized by impaired cell cycle progression.  Conversely, melatonin can also help protect us from developing cancer. Researchers found that melatonin exerts antioxidants along with additional cancer inhibiting  properties making it a powerful antitumor agent.

One more very good reason to create a consistently timed release of melatonin by blocking blue light at night!

So, there you have it.  Your natural circadian rhythm is your BFF.  The blue light from your digital devices is the worst friend ever.  Lose its number, defriend it on Facebook,  block it from calling, and banish it forever with blue light blocking glasses.  After that, you might even wonder why you ever tolerated blue light in the first place!